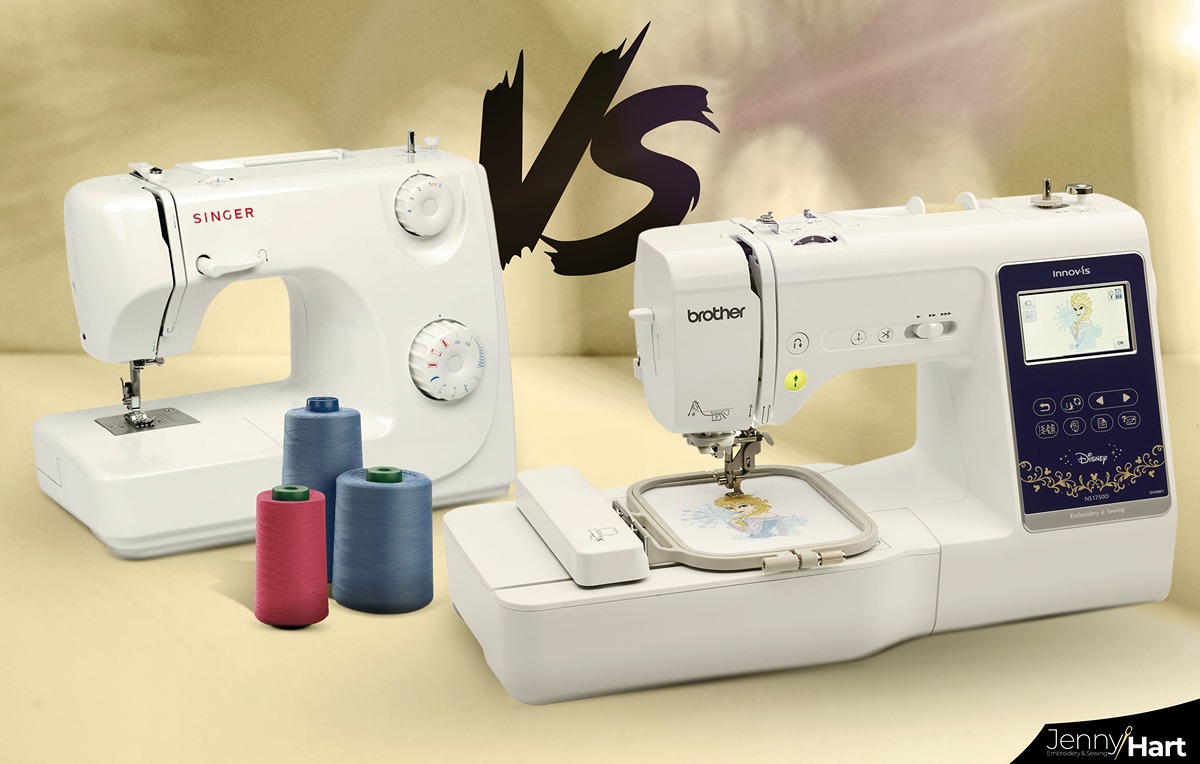 Given that several companies offer sewing machines, you can require one but be unsure which one creates the best items with the best features. I want to make sure that you know that only well-known brands of sewing machines can provide excellent quality and a long lifespan.

In such a situation, Brother and Singer are the first two brands that come to mind, and this is not a coincidence at all. The two most well-known manufacturers on the market consistently offer the best, highest-quality sewing machines. They each have distinctive qualities, and they both have their advantages. And because each of them has a chance to be top-notch picks, this is what makes choosing between them so challenging.

In this article, I will do my best to make a comparison between these two brands and the most popular sewing machine from each of these. Let’s now compare these brands to determine which is superior and offers more.

Comparing these two of the best sewing machine manufacturers will undoubtedly be challenging, as I have already indicated. Still, there is always something to compare and one that will demonstrate greater performance. Now is the time to go deeper and determine who is the true goat.

Brother – About the Company

Brother manufactures sewing machines at all price points, from entry-level to sophisticated models. Their high-end devices have complex menu systems, cutting-edge CPUs, and a wealth of creativity.

The sewing machines from this brand are well-equipped with various features and usefulness, not only that but also their embroidery machines are great too; they have a lot to offer, including built-in stitches, drop-in bobbins, automated needle threaders, and speed settings. And trust me when I say that compared to many other brands, you will receive all the features at a reasonable price.

Brother sewing machines are widely known for having a large selection of accessories, and they are of exceptional quality and are often built of premium plastic.

These were all advantages of Brother machines, but let’s examine any drawbacks to these exceptional devices. I don’t think of anything noteworthy that would qualify as a con.

Just a quick note to mention that Brother might have done a better job with sewing machine durability and that older generations could find it challenging to operate highly automated sewing machines.

Singer – About the Company

Is there something to say about a company that has been there for a century? You can tell how successful they are and that they are the market’s goat just by knowing this. Singer Sewing Machines, a brand that bears his name, was initially developed by American businessman Isaac Singer in 1851. The Singer is now the top sewing machine brand and the first company that comes to mind whenever we wish to buy one.

13000 machines were produced each week at Singer Kilbowie’s main facility, which is located in Scotland. A company with a century-long history like this is quite challenging to compete with.

The essential thing to note is that they never ceased developing cutting-edge, better, and even better sewing machines. I can confirm that Singe is the only company whose name is only associated with sewing machines and related activities. In addition, Singer was the company that initially debuted the zigzag sewing machine in 1952.

Singer sewing machines, which are not overly computerized, are effortless to operate, and many other members of the older generation choose these incredible sewing machines for this reason.

And now I’d like to give a brief overview of the top two sewing machines. See if there are that many variances between the two—one is from Singer and the other is from Brother.

One of the most versatile sewing machines on the market is the Brother sewing machine XM2701. This good sewing machine is simple to use, making it an excellent option for novices. It includes a variety of automated capabilities and stitch possibilities.

There are several ornamental and quilting stitches, basic stitches, and straight stitches available on the sewing machine. It offers 63 stitch functions in addition to the 27 built-in stitches. Although this sewing machine is not computerized, it has numerous automated features, including an automatic buttonhole and needle threader. It also has a top-mounted drop-in bobbin that resists jamming, which helps the stitching process go faster.

The Brother sewing machine XM2701 has many different sewing feet, including ones for buttonholes, zippers, zigzags, thin hems, blind stitches, and button stitching. As you can see, this sewing machine can very much meet everyone’s demands.

This Singer sewing machine Quantum Stylist 9960 sewing machine is outstanding and will meet your needs. It is a very lightweight, portable sewing machine you can use anywhere. It is also quite simple to operate. It has a 25-year warranty because of this.

The primary characteristics of this sewing machine that distinguishes it from other sewing machines are its features. It contains various stitches, including simple and ornamental stitches, for various sewing projects. You won’t have to deal with the frustration of tedious needle threading since the Singer Quantum Stylist 9960 has an automated needle threader.

It contains 600 built-in stitches, including 13 built-in 1-step buttonholes and five alphanumeric typefaces. Even though it might not be the quickest sewing machine, it also excels in this area, 850 stitches are sewn per minute by it. Due to its 13 presser feet, this machine may be among the most adaptable. What more could you possibly ask of a sewing machine?

Huh! It’s a lengthy article, but you guys should read it. I tried to compare Singer and Brother machine, two popular sewing machine companies. And I believe I performed admirably. As you can see, both of these companies provide the best sewing machines, making it very challenging to choose which is superior. After reading this article, I’ll leave it up to you to determine which is preferable.

Take care everyone, until next time.

If your shirt doesn’t fit correctly or feels a little smaller on you, check out this article to see if there are any tips for sizing up shirts, and then move on to another page for a nice comparison between quilting and sewing.

I’m sure you’re interested in reading more intriguing articles, so check out this one to learn whether cotton shrinks or not before reading another one on a tailor’s abilities and whether they can enlarge pants.

Best Sewing Machine Accessories Every Tailor Should Have