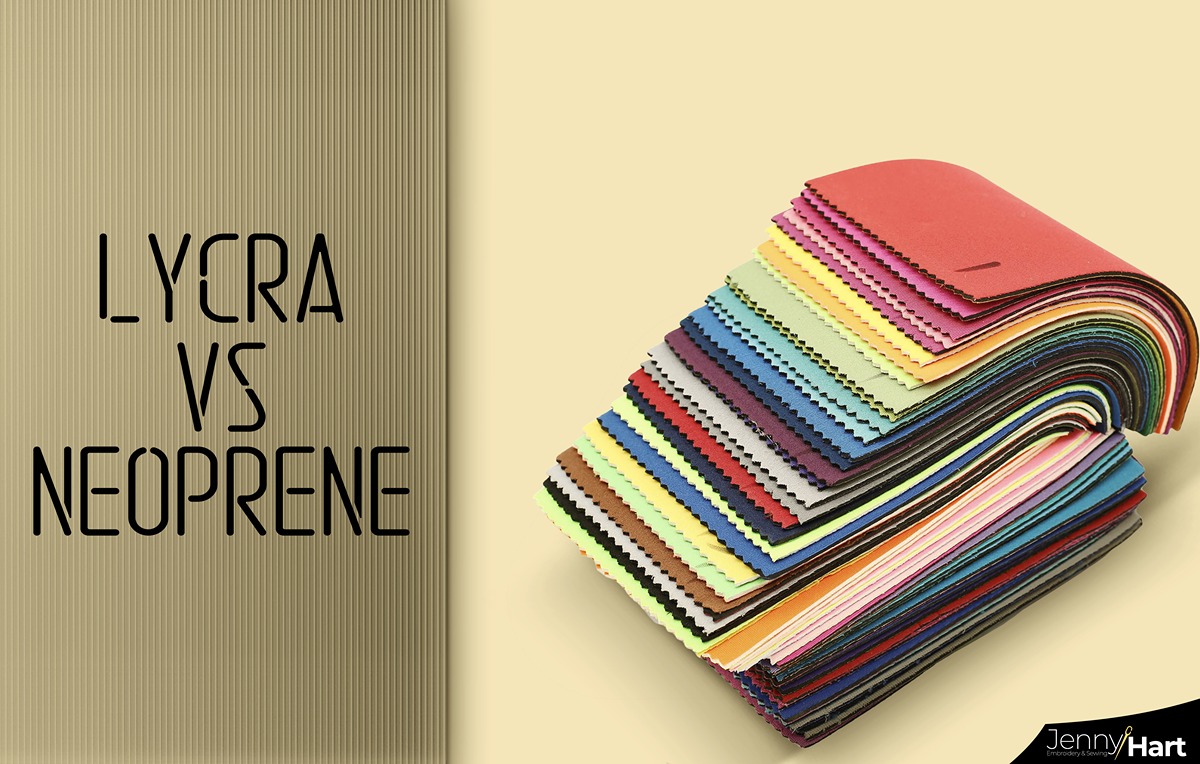 In this day and age, various synthetic materials are being used and produced by manufacturers. Lycra is a synthetically made material from a fiber called elastane. It is very popular in the production of comfortable and stretchy clothing. Neoprene is a type of synthetic rubbery material. These two materials are known for their flexibility, but they have their differences.

Lycra vs. Neoprene – How Do They Differ?

Synthetic fabrics such as lycra and neoprene are very commonly used in the production of clothing. Lycra is a fiber thread made out of a material called spandex. This synthetic material is produced from elastane which is a fiber well known for its stretchiness. This elastic fiber is often blended with fragments of other materials to increase the stretchiness of the produced piece of clothing.

Only a small amount of lycra is needed to give the blend additional elasticity. Lycra is a very durable fabric because it is moisture-absorbent and does not easily lose its original shape after wearing. In comparison, neoprene is a synthetically made type of rubber chemically produced from chloroprene. Because of its properties, neoprene is not as stretchy as lycra. Neoprene is waterproof and known to be very long-lasting because of its strength. These two synthetic materials are different in the way they feel and look on the skin.

Lycra and neoprene are materials that differ in the way they are produced. Lycra was originally made in a laboratory based in the United States by a chemist called Joseph Shivers. The lycra material is produced from a synthetic fiber called elastane by firstly using a chemical reaction. This chemical reaction produces a pre-polymer which is put into a reaction with acid. The mixture is made thinner by using solvents to make it easier to work with and it is placed into a cell that produces fiber.

The spinning cell also serves to cure the elastane fiber which is later heated to produce solid strands from the liquid. The strands are combined together and also twisted. The last step is transferring the yarn of lycra into a spool and it is ready to be used and manufactured. In the production of neoprene, the first step is to deliver the liquid form of a polychloroprene chemical to factories that make textiles and it is then combined with other elements to make it more elastic.

In order for the polychloroprene to get sturdy, it is baked in an industrial oven and eventually sliced. The slices of hardened polychloroprene are cut into shapes and sewn together to create a piece of clothing. The different processes of producing both lycra and neoprene are precise and complex.

When it comes to determining which of these two fabrics has more stretch, lycra has a big advantage. Elastane fiber from which the lycra material is made, often combines with other fabrics in order to give the material the ability to stretch increasingly. Manufacturers usually add a small amount of lycra to a piece of fabric because not much is needed to make the material stretchy.

Because it contains parts from other materials, lycra is regarded as being durable, stretchy, and elastic. Lycra is known for its ability to take in moisture and eliminate the possibility of sweat getting stuck on the skin. People often opt for clothing pieces containing lycra fabrics because they are comfortable to wear. In comparison to lycra, neoprene has less stretch and elasticity because it is similar to rubber. Its stretchiness often depends on the cost of the particular item.

Cheap pieces made out of neoprene have the ability to stretch slightly. However, high-quality neoprene pieces also marketed as having a “super stretch” are highly flexible. Wetsuits are usually made from neoprene because of their ability to stretch and fit the body nicely. Neoprene is also a durable material and it is known for its waterproof qualities and the ability to retain its shape. Lycra has more stretch in contrast to neoprene but if the neoprene items are well-made they can also be flexible.

Materials that contain some sort of stretch in their properties are commonly used to produce comfortable clothing such as sportswear, swimwear, and even underwear. In order to increase durability, manufacturers tend to blend lycra with other materials as well. Not only that but blending lycra with other fabrics also provides stretchiness. Stretchy clothing made out of lycra is produced in order to produce pieces that follow the contours of the body appropriately while at the same time offering comfort and breathability on the skin.

Underwear is often made from lycra to give it more elasticity. The flattering appearance and durability of the lycra material make it suitable for the production of sportswear and swimwear. People often choose various different pieces of clothing made out of lycra because of how comfortably it sits on the skin without feeling sticky or discomfited.

Neoprene fabric is known for its softness to the touch, breathability, and lightweight feel. Sportswear and swimwear are continuously being produced from neoprene because it is known to be waterproof and durable. Even though neoprene is a fully synthetically made material, manufacturers still add even more chemicals to it which can lead to allergic reactions on the skin.

Generally, neoprene is safe and comfortable to wear. However, it can negatively affect human health if it is not used cautiously. Lycra and neoprene are two fabrics that have the ability to provide comfort when they are in close contact with the skin in their own unique ways.

Synthetically made fabrics such as lycra and neoprene are known to be more durable than any natural material. For this reason, many people choose these fabrics in order for them to last a long time and not have the need to constantly buy new pieces. Lycra is a more stretchy fabric than neoprene and it eliminates the possibility of causing an allergic reaction. Both of these fabrics are safe for everyday use if enough attention is paid to how they may feel and react to the skin while wearing them.

You can carry on and read some other great blogs for example there is a comparison between Lycra and Elastane.

Another article review a really good sewing machine from Singer the Singer 4423. You will also find the answer to whether cashmere stretch.