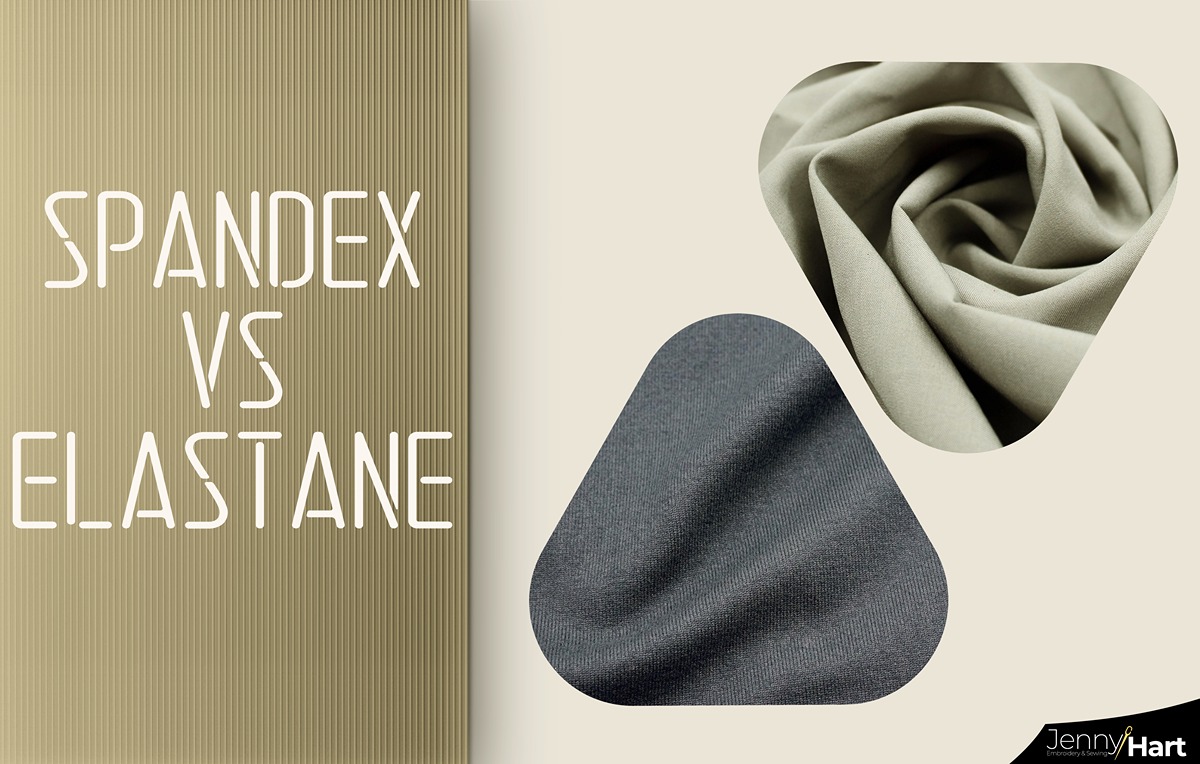 When you wear leggings, cycling or running shorts, or denim jeans, it’s hard not to notice how they cover your legs tightly, are super comfy to wear, and simply move with you. Well, the reason for this is that such garments feature elastane or spandex, which are synthetic fibers used for manufacturing clothes that need to be elastic, comfortable, and form-fitting.

So, now that you know this, you’re probably wondering whether spandex and elastane differ and if so, in what ways. Trust me – you’re just one of the many who feel confused about these two materials. But you’re in the right place, as in this article, I’ll try to remove that confusion and explain whether the spandex vs elastane comparison is even worth making. Let’s get into it.

Spandex vs. Elastane – How Do They Differ?

You might be surprised by the answer, but there’s practically no difference between spandex and elastane. So, let’s begin with the term that was used first – elastane. Namely, the term elastane refers to a fiber that is produced synthetically. It consists of polyethylene glycol and polyurethane, which is a polymer to which the excellent elastic property of this fabric can be attributed. Polyurethane is also its key constituent.

Elastane is very commonly used for manufacturing a wide range of fabrics and garments thanks to its amazing stretch properties and its ability to restore its shape regardless of how much and how many times it’s been stretched. It’s also praised for being form-fitting, soft, durable, comfortable to wear, and stain- and wrinkle-resistant.

Due to these features, elastane fabric is commonly used for manufacturing activewear, swimsuits, and lingerie.

So, if elastane is a synthetic fabric known for its extraordinary elastic properties, then what type of fabric is spandex? (make sure you take a look at our guide on how to shrink spandex)

Spandex is just another name for elastane. Simple as that.

Just like elastane, spandex is synthetically made and its basic constituent is the polymer polyurethane. It’s lightweight, strong, heat-resistant, and possesses extraordinary stretch properties, which is why it’s present in garments and other fabrics that need flexibility and stretchiness, such as underwear and activewear.

So, now that you know that these two words refer to the same thing, another thing you should know is that if there’s anything that makes these two fabrics different, it’s these two things:

Also make sure you read spandex vs lycra.

Spandex was originally created in the U.S. in 195o. Namely, scientists in Germany during WWII tried to come up with a synthetic alternative to rubber, which was intended to be used for performing different military projects during the war. Trying to succeed in this, a scientist called Otto Bayer created the polymer polyurethane, which would later become the main constituent of spandex. However, in the period that preceded the war, the elastic polymers that later would be known as elastane were also coincidentally developed in Germany.

In the period following the war, these polymers ended up in the hands of scientists working for the DuPont Company based in the U.S. Although the German scientists didn’t plan to use the polymer polyurethane for manufacturing clothes, scientists at DuPont did thorough research into the features of this polymer and realized that it could be used for manufacturing incredibly stretchy fabrics.

One of those scientists, named Joseph Shiver, managed to develop an elastic fabric in 1958 based on elastane fiber. However, rather than naming the fabric elastane, they called it by the name spandex, meaning it “expands.” So, this is basically how elastane fiber got commercialized this year.

Nevertheless, the intention of DuPont Company was to draw attention to this stretchy fabric, so for that reason, they started selling the elastic fabric under the name Lycra. Since then they’re considered the best manufacturers of spandex fabrics all over the world.

Elastine can be produced in several ways, but the most commonly used method for manufacturing this fabric is known as solution dry spinning.

During this phase, this mix is combined with specific phenols, additives, and other important compounds in order to make the fabric heat- and water-resistant.

All of these processes lead to the production of a solution which is further thinned down and then put in a cylindrical fiber production cell. In this container, the solution passes through a spinneret containing tiny holes and it’s exposed to nitrogen and high temperature, which causes it to transform into strong fibers strands in various sizes which are later twisted together.

Finally, the elastic fibers are soaked in dimethyl-siloxane or magnesium stearate and put into spools. Then they are packaged and sent to manufacturers.

As for spandex, we already saw in the previous section that it’s made of polyurethane which is later converted into an elastic fiber by using different methods, but the most commonly used one is the dry spinning method.

First of all, I hope that all the information and details I’ve presented in this article will remove the confusion surrounding the two terms elastane and spandex. I also hope that it’ll be clearer to everyone how important elastane/spandex is in the textile industry.

Since I already said that elastane and spandex refer to the same thing and only have two minor differences, choosing one of them as better or more popular is nonsense.

How To Remove Logos From Clothes: Explained Step-By-Step

Spandex vs. Cotton: How Do They Differ?