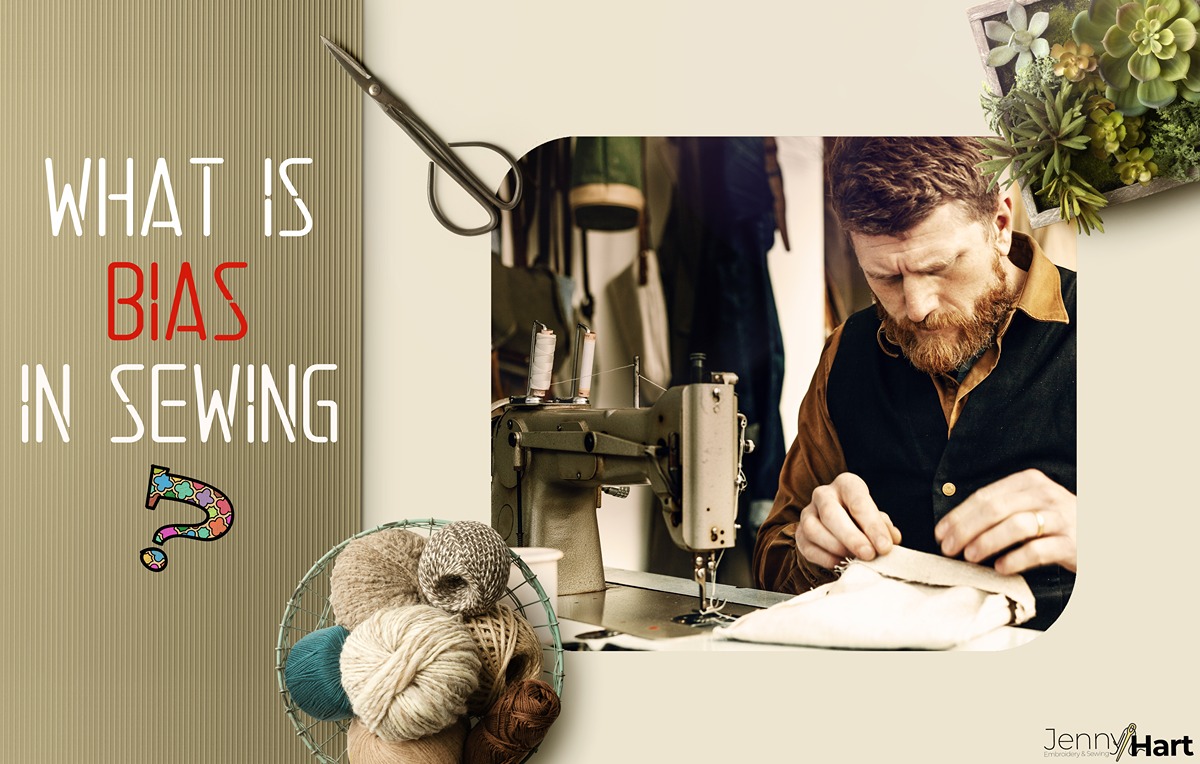 “What is bias in sewing?” is a question I often hear from beginning sewers. Bias refers to the fabric’s diagonal lines and sometimes the pattern. Bias is used for many things in sewing, from laying out the pattern to making a seam. This blog post will explore bias in sewing and give some tips and guidelines on using it correctly. Read on!

So, What is Bias cut?

A bias or miter cut means cutting the fabric at a 45-degree angle to the straight grain so that the fabric conforms to the body’s shape. In short, the fabric is cut diagonally! So, to differentiate bias, you don’t follow the straight line of the weave. It’s one of the characteristics of the bias cut that it places the pattern on the woven fabric, but at a 45 degree angle. At this angle, the “warp” and “weft” threads give the fabric more elastic “stretch.”

Also, read the meaning of batting on sewing.

Advantage Of A Garment Made With Fabric Cut On The Bias

There are a few advantages to fabric made on the bias. First of all, it’s a more comfortable fabric to wear. It has a higher stretch than traditional fabrics, which means that it moves with you. This makes it more comfortable to wear and less restrictive. Additionally, bias-cut fabrics are more wrinkle-resistant than other types of materials. They don’t tend to pill as much, and they look nicer when they do pill. Bias-cutting also creates a more even surface on the fabric, which makes it easier to sew and less likely to stretch out of shape.

How To Do A Bias Cut On Fabric?

Bias cutting is a process of cutting fabric along the bias (the bias is the wrinkle running vertically along the length of a piece of cloth). When the material is bias-cut, it drapes naturally and hangs more smoothly. This is a great way to save money on fabric and make your clothes look and feel better.

You’ll need a bias cutter and a straight edge to bias-cut fabric.

Also, read the differences between quilting and sewing.

Tips for Making the Bias Cut

There are a few things that you can do in order to make the bias cut on fabric as easy as possible. Keep on reading!

The first thing you should do is measure the fabric you will use. Measurements that you make will help you to get the right cut, and it will also help to ensure that the fabric that you are using is of the right size.

When choosing fabric for a dress or piece of clothing, it is crucial to consider bias. The bias is the fabric’s length perpendicular to the selvage. The bias will affect the drape of the fabric and how it hangs on the hanger.

You should pay attention to the grain of the fabric. This will help you get the right shape and finish. It is essential to choose a bias that will complement the body’s shape and style of the dress or garment. For example, if you are sewing a bias-cut dress, choose a fabric with a low drape so that the dress falls smoothly and softly from the body. If you sew a strapless dress, choose a high-drape fabric so the straps will show.

Use a Suitable Surface

When making bias cuts, you need to use a suitable surface. A surface that is not suitable will result in inaccurate cuts and will also distort the fabric. Some surfaces that are not suitable for bias cutting are hardwood, tile, granite, and many types of marble.

How to Use Bias Tape in Sewing?

Bias tape is a fabric tape that is used to keep fabrics in place. It is very important in sewing because it can be used for a variety of purposes, such as attaching fabric to a piece of clothing, keeping fabric in place during a hem or neckline, or securing fabric around an elastic band.

Also, read how you can remove logos on garments.

How do you find bias in fabric?

How do you sew bias?

Can you cut a straight-grain pattern on the bias?

Yes, using the correct tools and techniques, you can cut a straight-grain pattern on the bias. However, the grain will likely be more pronounced than if you cut the grain in a straight line. To cut a straight grain on the bias, use a rotary cutter with a straight edge and a standard blade. Make the cuts slowly and evenly, using slight pressure to prevent the blade from skipping.

So, bias cut is basically cutting the fabric diagonally at a 45-degree angle. This article made it clear to you why bias is used and what its advantages are. Remember to use a bias tape measure, the right fabric, and a suitable surface when cutting bias. Thank you for reading!

What Is Batting In Sewing? (Explained)